Man eaters, no spots, and Myself

A quick update from a busy week, so I'll get right to it:

Firstly, there is one big problem with having a mantis army guarding your doorstep. In order to increase your mantis population...

...you must first decrease your mantis population. 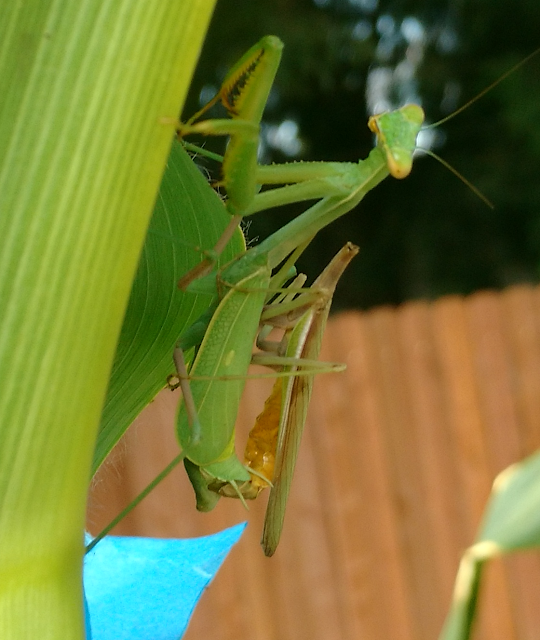 I put my phone so close to her I was sure I was going to get my fingers snipped off. For anyone still confused, google sexual cannibalism. ACTUALLY, definitely put the word 'mantis' in there too.
Just in case.

Apparently female praying mantises (or praying mantids, but which I hear as praying man tits no matter how hard I try) chew of their partner's heads during sex only, like, 13–28% of the time. At least according to the article I read two minutes ago on a sorta scientific website.

All in all, there's been a lot of 'good bug' sex in my garden lately. (As opposed to 'good bug sex,' which reads entirely wrong). And, headless horseman aside, I'm super happy to be the host of a future nursery of beneficials.

Because, seriously, I don't even have the heart to show how terrible the aphids have gotten. And the spider mites. And the white flies, kill me, those white flies. I'm basically just growing bugs, with some plants underneath.

Another fun bug fact, the myth that the number of spots on a lady bug determines its age is exactly that: a myth. Though spot numbers can sometimes help you tell the species of lady bug, as is the case with the Seven-spotted Lady bug. I bet you'll never guess how many spots that one has.

I think I've only seen one other ladybug in my garden since the day I moved in. And the fact that they (or at least one) are/is finally showing up, in my time of great need, gives me all sorts of warm and fuzzy feels.

Something that doesn't give me the warm and fuzzies --

Whatever this is. Look familiar? Leave me a comment. I've legitimately never seen this wobble walking grasshoper wanna-be before. I'm pretty sure it wants to eat my shit, but I hesitated squishing him until I know for sure.
~~~~~~~~~~
IN OTHER NEWS, remember when I found a mystery seed in a baggie and decided to plant it? 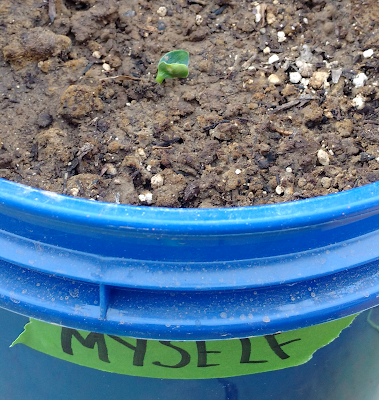 That picture was taken yesterday. To give you some idea of how fast, below is a picture of my Gete Okosomin squash, taken today. 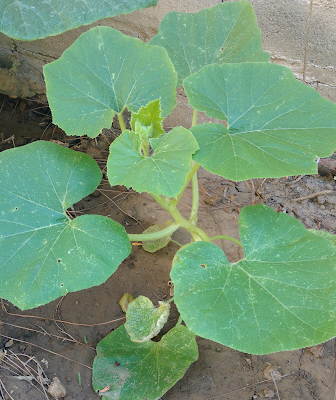 And he's a few days older than Myself. Pretty wild.

So far, I'm thinking Myself is probably a C. pepo squash, based on leaf shape and color. She's yet to form any immature fruit, so until then we can fling around any theory we want. I welcome your thoughts and ideas on the matter. Look like anything you're growing?

Oh, and in the off chance you were thinking "Boy, that headless mantis from the first picture sure looks like Bean Bob..." 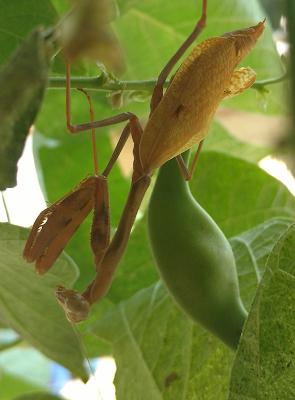 Bean bob is alive and well, which was the first thing I checked too when I realized Corn Carl (now Carlita) had nommed someone's head off. He's gotten big, too, and is growing flap flaps on his back like his cannibalistic lady neighbor. And while I love my mantis guardians dearly, I won't lie -- having a bunch of giant flying snipping fingers everywhere gives me the willies.

Now, as to how long Bean Bob will be alive and well -- it mostly depends on whether he is in fact Bean Bob, or rather Bean Bobbita.

Final fun bug fact of the day -- apparently color is not an indication of mantis sex, as I first thought. Rather, you have to count their abdominal sections. Females have six, males have eight.

Goodie. Looking forward to leaning in close for that one.

That's it for today's speed post; Happy September! And, as always,