...because my stomach doesn't. I've been trying to eat down my dozen plants so I can tear them out. Did I honestly think I could eat a dozen swiss chard plants? By myself? Because that... well, that was some ridiculously optimistic thinking Day. 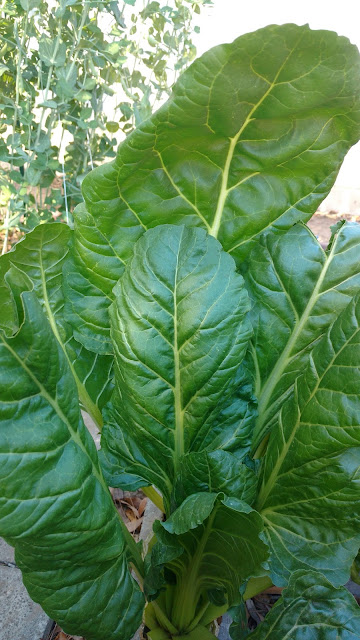 I mean, cripes, this is one of the plants I have to tackle. See that center leaf, the one facing us looking all pretty? 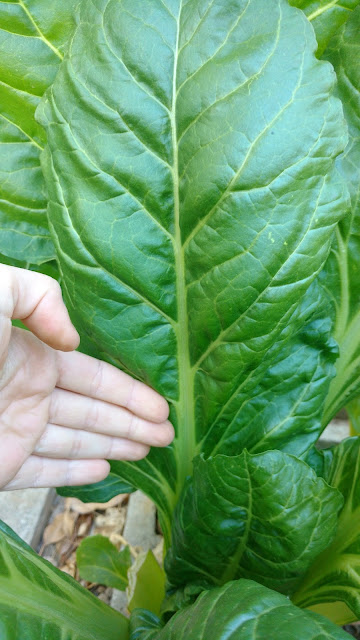 This is for scale. The leaf behind it is an elephant ear. You could make a burrito the size of a baby with it.

So this Harvest Monday post is also me coming to terms with the fact that most of this chard is going to end up in the compost pile in the near future. I'm genuinely ashamed of that. It's true I need more green layers in the compost right now, seeing as it's full of dry leaves, but I prefer to use inedible sources for my nitrogen kick.

But I can't help it --  my body just can't do anymore chard and nobody else wants to take it.
("Swiss... what?" they say, peeking cautiously over the fence and staring dubiously at the green stuff.)

And when I say my body can't do anymore chard... I don't mean it's a taste bud thing or a lack of inspiration on how to prepare it. What I mean is -- my GI tract is in full rebellion, torches and pitchforks, marching down main street level unhappy. It does not like chard. At all. Beets, cool, no problem. But chard? Burn the witch to the ground. 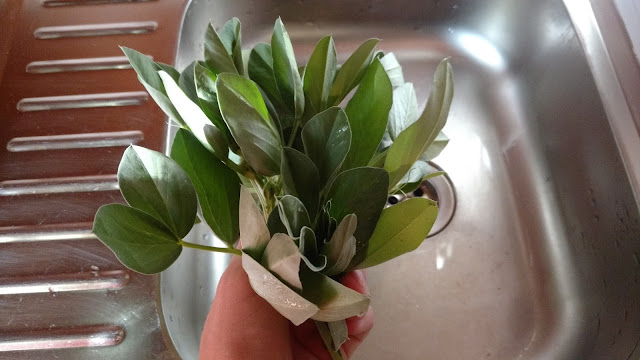 I'll save you the details, suffice it to say I thought it was the fava greens (above) so I stopped eating those for most of the week, and doubled up on chard instead. That... was a mistake.


I only took harvest photos of the endless chard when I also had something else to show, however small. See that pea shoot on top of the pile?

I was just checking on the favas, minding me own business, and wham! punched right in the earlobe. Now, I didn't mean to break his arm off entirely, but c'mon... if something's poking around in my earhole, you can be damn sure I'm gunna go full ninja about it.

Anyway, the offending shoot was supposed to get cooked with the chard, but he got lost during meal prep. When I eventually found him while doing dishes, he was collapsed by the sink, wilty and sad. Aw.

Oh heartstrings, you pluck for the strangest reasons... 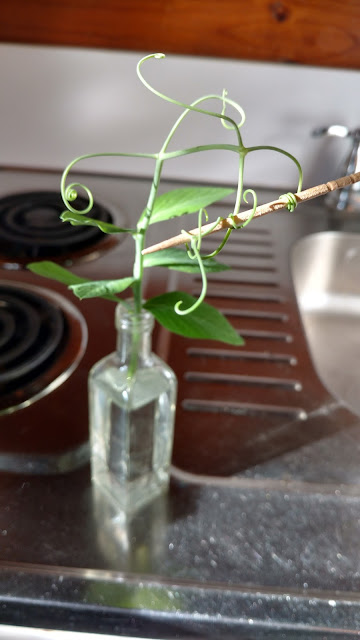 So he got a teeny vase. And a toothpick to hold. For whatever reason, I feel much better now. 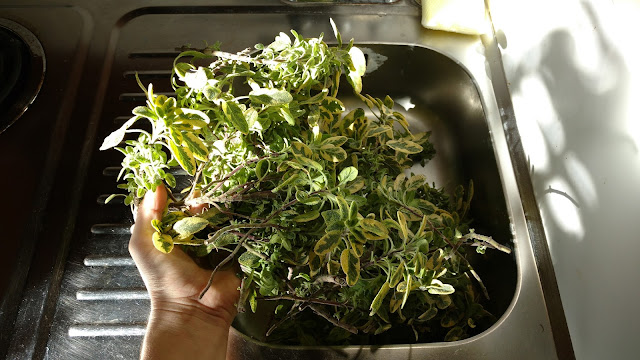 Apart from chard, my biggest harvest this week was Golden Sage.

I mentioned a while back that I had two plants that needed to be lopped back. Cutting the first one gave me two jar vases of fresh sage that I'm still trying to use up. But I couldn't stand staring at the second, leggy, scraggly sage anymore. So I sheared him too, and I decided this batch was going to be dried straight off. 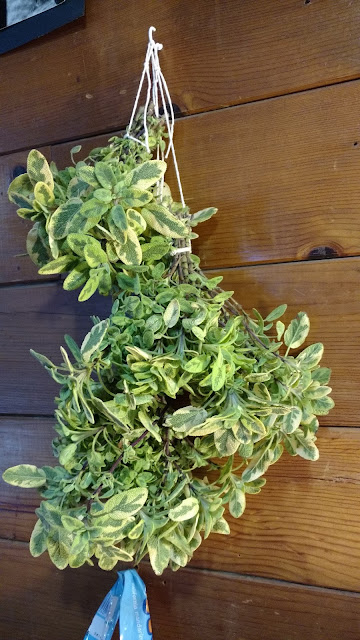 After a wash (evicted: 1 cabbage looper, 1 startled moth, and lots of dust) the sage made three hefty bundles that are now hanging to dry above the fridge.

Up until planting sage, I didn't cook much with it. I associated it with 'meat cooking,' and though I eat meat, I don't cook with it all that frequently. And while I do bake with eggs a lot, I don't prefer them alone. I've never been an eggs for breakfast person, bleh.

Last week however, I got distracted with life and didn't make it to the grocery store when I needed to. The cupboards were bare. Boo. I did have eggs, though, so I scrambled some up. Fine. I threw in some sage. Why not.

Oh my. It's strange how some things smother sage's flavor, and other's highlight it. The eggs definitely highlighted it, in a very good way. And while I'm still not a convert to scrambled eggs, I'll remember the sage next time I'm forced to eat them alone.

And while I'm on the topic of food conversion, I decided to try eggplant again.

Last summer I grew half a dozen eggplant plants (plant plants?) of two varieties: Mitoyo and Casper. Well, the spider mites had a fucking holiday on them, and at the end of a long and bloody war only one stood victorious: a single Mitoyo plant, since named Moriarty. But victorious is a very generous word... he lived. Barely.

During the battle I ate a lot of small and tender eggplant  from both varieties. I didn't find them insipid, but I couldn't fathom why people got excited about them. The plants were difficult to germinate, grew slowly, attracted every pest on the planet, and for all the care they required, they returned the favor by producing lots of flavorless oil sponges.

Hm.
I didn't get it. I tried cooking it a lot of different ways, and the appeal alluded me.

But it's been half a year since my last bite, so I decided to try again. I'll save you the cook&prep hoohah and get to the point: nope, not converted. I did nibble on some of the raw flesh while cooking, and it reminded me of a grocery apple when it gets spongy and dry and old. Still, it was very faintly sweet. Not the worst thing I've ever tasted, but not something I'd snack on. Though I did prefer the raw to the cooked, to be perfectly honest.

Moriarty will, however, get a reprieve from the compost pile and continue to live and grow purple sponge grenades despite my taste preferences. Eggplant make a perfect gift to give my neighbor-who-cuts-my-hair. So while I'm not eating them, at least someone is.

And the lacewings love Moriarty, as you can see. Though that's only because he's overwhelmed by spider mites... again. But that's enough about spider mites for now. It's only Monday.

Also, I nearly forgot, in the above above photo, you can see an itty bitty teeny weeny Paul Robeson tomatey.

Ok, it was mealy and tough skinned, but with decent flavor. I don't blame the plant. It's had a rough life. It made better fruit, once upon a time. The fact that it's even attempting to make tomatoes right now makes me happy. So I took my small victory and ate it during meal prep. 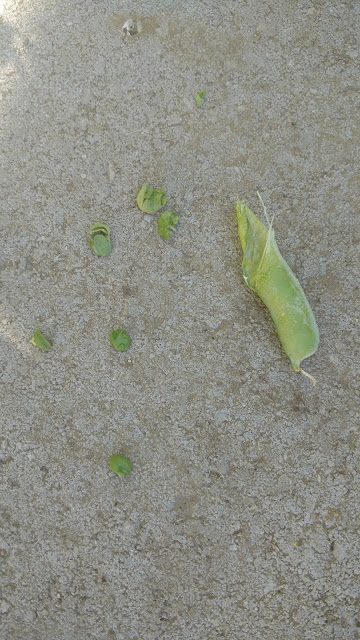 Um...
I guess you could call this a harvest... though it wasn't a happy one. And there were many more where this came from, unfortunately.

This year I'm growing four types of peas: Sugar Snap, Cascadia (snap), Golden Snow, and Sugar Magnolia Tendril (snap). As it turns out, my Cascadia gene pool is a disaster. They are supposed to be bush snap peas with white flowers. Well --

That one you see above is the first I discovered, as I innocently bit into it. In this particular one, the peas themselves were also super bitter. The shock and horror of it all had me gracelessly spitting the whole thing out onto the path.  No shame. 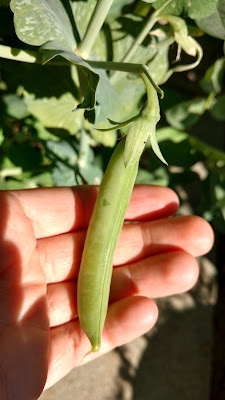 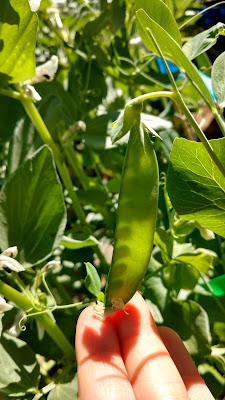 Above left: what a cascadia pea is supposed to look like. Above right: one of the many rogues, likely due to accidental crossing resulting from poor isolation practices.

So lot of my un-photographed 'harvests' this week were pea taste tests. When I found a fibrous one, I played the super confusing game called follow that stem! down to the root line so I could pull out the whole plant. And since the peas were growing in a wild mix of bush and pole, it was chaotic pea tumbleweed labyrinth to navigate. I was as delicate as I could be... but one of the patches still looked like this after I was done: 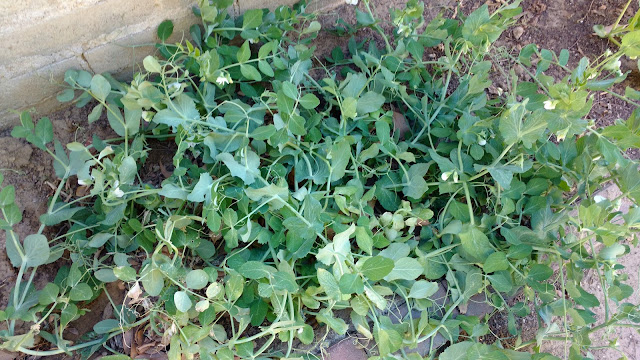 To add insult to injury, when I made my pea crosses last month I may have used pollen from some of these fibrous plants. I tag the females so I can find the pods I've crossed, but I don't tag the males. So despite the best laid plans of mice and Day, I may be culling the fibrous gene out of my pea crosses for years to come.

Once again: you win some, you lose some! 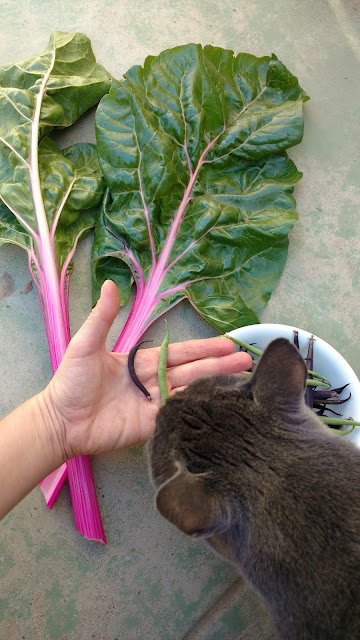 These beans were itty bitty things, grown mostly as a nitrogen ground cover. Most are Purple Teepee, which was a bean that grew poorly for me, set poorly, and produced tiny, scythe like beans.

I tried growing them twice last season, at different times of the year and in different places. Same results. So the few beans I had left in the packet were sown haphazardly before my five week disappearance. This week I pulled all the plants as they were getting powdery mildew.

The bitty baby beans were thrown into a stew. The few green ones are Calima, which is actually a great bean, but the plants were shaded out by lettuce so grew much slower.

The bowl is actually quite full, though not like you could tell: photo bomb courtesy of Greynoodle Noseypants who had to take a quick 'niff in case they were meats and I was holding out on him.

That's it for this week at the Shandy Dandy -- Harvest Monday is hosted by Dave @ Our Happy Acres: make sure to swing by and see what's he's harvested, and link up if you have harvests of your own.