Mystery Squash, aka. Myself

Don't you just love when you leave a special present for your future self, a secret little something tucked away somewhere that you're positive you'll remember what it is, and what it's for, when the time comes...

This morning I found this in the bottom of a storage tub.


Clearly, it's a squash seed, but as to what species (or what variety) I haven't the foggiest. I don't even understand why I would put this super special little turd in a ziplock baggie (of all horrible seed storing places) and then leave it completely unlabeled and abandoned for, probably, years.

So, in the spirit of science - LET'S GROW IT.
Or try, anyway

As anyone who's planted squash knows: a single seed can conquer the known universe. Bush squash have some manners, sometimes, but vine squash -- no fucks given. They don't care about your garden plans, your tidy little maps. They do what they want. They're like cats: the world is for them, and they'll have any part of it they choose. Including, all of it.

Case in point: meet my North Georgia Candy Roaster squash vine. One seed. Terrible location. Infrequent watering. Singular purpose: provide pollen for bush buttercup. That's it. That's all he had to do. Didn't even have to make fruit, just pump out some man dust.


AND WOULDYA LOOK WHERE THAT GOT US. Kid's literally climbing up the walls. Apparently, he didn't like his time-out corner of no sun and old construction crap. So he decided to go on the slow motion prison break.


Clearly, my hypothesis that low light and limited watering would keep his vines small was, how do I say... a really, really stupid theory. Science! Forgetting how far the roots stretch, he's clearly been getting drunk off his neighbors' moonshine and using his own cross-fit tendrils to climb anywhere he damn well pleases.


Regarding Mystery squash -- I unfortunately don't have another crappy fence/wall gap to sacrifice. What I do have, however, is... 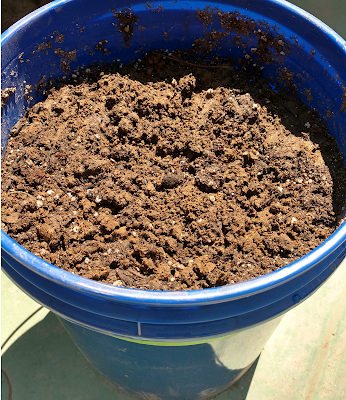 As you may have noticed in the blurry backgrounds of most my photos, I have blue things. Everywhere. Some are storage tubs and kiddie pools converted into raised beds, but the majority are Lowes 5 gallon buckets. I have a lot of them. Like, dozens. Why?

Because half my garden (and the best sun spots) are an old concrete parking pad; aka, the "stove." While this area gets nearly full sun it also gets full death (a subject I'll expand on more in a later post.) This makes it the best place for most vegetables and the worst place for tubs, pots, and raised beds. A bit of a pickle, really.

But, for the low low price of around $3.50, I can buy a bucket, drill holes in the bottom, fill it with dirt, plant something, and then proceed to drag that sucker anywhere I want it, depending on how oven-y the weather plans to be that week.

While the price point per gallon is cheaper with the tubs and kiddie pools, they are also nigh impossible for me to move once I fill them. A fact I realized when my melon leaves turned into potato chips during two different, week long, 110+ degree heat waves in June. I had minor success pulling, shoving, and grunting the 20 gallon tomato tubs to the cooler side of the stove. Which is kind of like saying I turned the stew from rapid boil down to simmer. But moving the kiddie pools? 30 galloners? Nope, they screwed.

But I digress. As for Mystery squash. 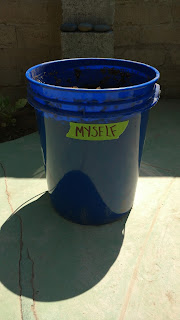 The deed is done.

Hopefully the root limiting confines of his new blue jailhouse will curb any world conquering vine tendencies, at least a little bit. It will also allow me to drag/waddle the future plant anywhere there's free space at the time.

And... in case you were wondering why the label "Myself" = I initially wrote this post on my phone, and my mind often gets ahead of my fingers when typing. Consequently, I often skip or rearrange letters in my attempt to type the words before I forget them.

Turns out, each time I wrote Mystery, I was actually typing Msytery. Auto-correct narcissistically decided this meant Myself. So, reading it again later, I enjoyed a lovely tale of finding myself in a baggie, sticking myself in a bucket, and dragging myself all around the yard.

Ergo: Myself, the mystery squash.

I'm certain this will not cause any confusion in the future, none what so ever.
By Day at July 31, 2017
Email ThisBlogThis!Share to TwitterShare to FacebookShare to Pinterest
Labels: Seeds, Squash